Apple’s made some significant strides with its Mac lineup over the last 18 months. At the end of 2020 we saw the first Apple Silicon processor in the M1. Then, at the end of 2021,  we saw the iPhone maker released two faster chips for a completely redesigned MacBook Pro. The M1 Pro and M1 Max boost performance across every metric, furthering Apple’s transition of the entire Mac line away from Intel processors to its own Apple Silicon chips.

The story doesn’t end there, however. Apple just announced the M1 Ultra, which basically amounts to two M1 Max processors linked together (for lack of fancy terminology). By Apple’s own admission, the chip makes the latest Mac more powerful than the very expensive Mac Pro. That new Mac, by the way, is a Mac Mini on steroids called the Mac Studio.

Apple’s transition away from Intel to Apple Silicon is nearly complete, with just a few Macs left still using Intel processors. Below I’ll breakdown Apple’s current Mac lineup as well as detail who each model is best suited for. 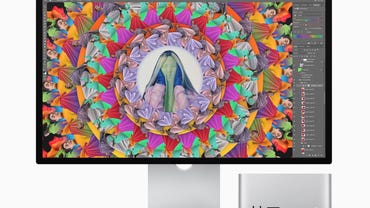 Apple’s Mac Studio looks like a very tall Mac Mini. The added height is for the cooling system Apple has engineered to keep the internals cool. Speaking of internals, you can pick between putting Apple’s M1 Max processor or the brand new M1 Ultra processor inside the Mac Studio. The M1 Ultra is effectively two M1 Max processors that combine to create a powerhouse of computing performance.

If you need plenty of performance and price isn’t a factor the Mac Studio is exactly what you want. Heck, even the base Mac Studio build is more than enough power for nearly every user I know. Unless you spend your day doing 3D animations or editing 8K video, the high-end Mac Studio is overkill. 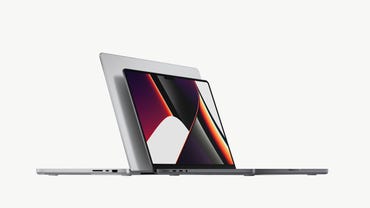 The base 13-inch model sticks to a design that includes a TouchBar and lacks an HDMI port or SD Card reader. The recently announced MacBook Pros, however, have ditched the TouchBar in favor of dedicated function keys and a Touch ID sensor. The larger MacBook Pro models also have an HDMI 2.0 port, an SD Card reader, and MagSafe has made a comeback.

The performance of the M1 Pro and M1 Max is everything Apple promised, delivering speed and battery life in a laptop chassis. On top of that, Apple brought back all of the connections and peripherals we’d be told w needed.

The MacBook Pro line has always filled the role of a portable laptop that provides extra power and, now, extended battery life. If you’re in need of a laptop that will allow you to edit videos and photos or dive into CAD programs on the go, then the MacBook Pro is for you. 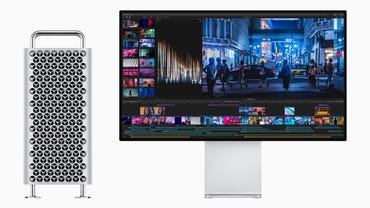 The current Mac Pro was released in June of 2019, so its internal hardware is somewhat outdated at this point. For example, all of the USB-C/Thunderbolt ports are Thunderbolt 3, while Apple is nearly done transitioning its Mac lineup to Thunderbolt 4.

That said, it’s the most expensive Mac money can buy, but after the Mac Studio announcement, Apple’s claiming its no longer the most powerful. Pricing starts at $5,999 for the specs you see listed above, but you can max out the Mac Pro for a total cost of $51,948 — and that even includes a set of wheels that go on the bottom of the Pro’s housing. It doesn’t, however, include a display.

The Mac Pro is a niche product for people who need a lot of computing power — even more than what the Mac Studio offers. Someone who does a lot of 3D, CAD and 4K/8K video editing, for example, will benefit from building the Mac Pro to fit their use case with more memory, a faster processor, or more storage. 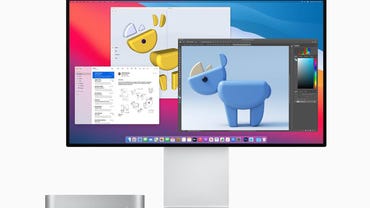 The Mac Mini was switched over to Apple’s M1 processor alongside the MacBook Air and MacBook Pro in late 2020. Apple didn’t completely ditch the Intel Mac Mini, however, as the company still sells an Intel-based Mini that starts at $1,099.

That’s a big price difference compared to the M1 Mac Mini that starts at $699, and as with the rest of the M1 versus Intel comparisons, the biggest caveat here is going to be the amount of memory you can put into the Mac Mini.  With the M1 Mac Mini you’re locked into a maximum of 16GB of memory. The Intel mode maxes out at 64GB.

The Mac Mini is a strong desktop option if you don’t need anything portable, and now it’s more affordable than it’s ever been. Unless you absolutely need gobs of memory, there’s really no reason to go with the Intel version of the Mac Mini, especially with its starting price and the performance you gain from the M1 Apple Silicon processor.

The biggest downside I can think of to the Mac Mini is that you’ll still need to supply your own display, keyboard, and mouse. 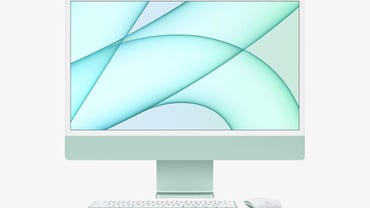 You no longer have two size options when it comes to iMac. After announced the new Mac Studio and accompanying Studio Display, the 27-inch iMac was removed from the Mac lineup. That means you’re left with the 24-inch iMac as your lone option, but, hey, it comes in some really cool colors.

The 24-inch iMac has an M1 processor with the same 7-core or 8-core GPU configuration as the MacBook Air. Reviews of the 24-inch iMac have been on par with other M1 Macs. It has plenty of power and is capable for everyday computing and then some. Keep in mind you can connect an extra monitor to the iMac to add more screen space.

Apple has developed color-matching keyboards for the new iMac, which have built-in Touch ID sensors. Meaning, you can log into your Mac on the included keyboard using your fingerprint. Right now, these keyboards are only available with the new iMac and can’t be purchased on their own.

The 24-inch iMac comes with two Thunderbolt 4 USB 4 ports and two USB 3 ports, and the power adapter now has an Ethernet port built into it.

If you’re looking for an all-in-one desktop that looks great and has enough power for you to get basic and some pro-level tasks done, then the 24-inch iMac is worth considering.

The design of Apple’s MacBook Air hasn’t changed much over the years, and that’s alright with me. It’s a classic design that lends itself to portability, and now with the M1 processor, performance.

Apple no longer sells the MacBook Air with an Intel processor, with the main purchasing decisions now based on whether you want the base model that comes with a 7-core GPU, or a step up with an 8-core GPU. For most, the 7-core GPU will suffice.

Outside of the GPU, you can select between 8GB or 16GB of memory, and increase storage up to 2TB. You’ll get a Touch ID sensor on the keyboard for quick unlocking of the MacBook or any protected apps, like a password manager.

The MacBook Air continues to be the perfect Mac for someone who doesn’t do much more than web browsing, school or enterprise work in Office apps, and/or occasional video or photo editing.

What is the best Mac?

The best Mac is the Mac studio M1 Ultra. This Mac showed to be the most capable and highest performing Mac ever, with a very impressive processor and features.

Here is a breakdown of all the Macs mentioned above and their key specs:

Which Mac is right for you?

Before spending your hard-earned cash on an expensive computer from Apple, you need to consider what you’ll use it for and the specs you need. If you are a lightweight user who merely browses the web, then perhaps the MacBook Air is best for you. If you are a video producer who needs a lot of power, then consider one of Apple’s more brawny machines such as the Mac Studio, which you can get with the external Studio Display.

How did we choose these Macs?

We’ve tested and owned several Mac models over the years and therefore know Apple’s computer range like the back of our hands. But we’re also familiar with the specs and hardware powering each model and are aware of how old they are, whether an update is incoming, and just know in general which ones are worth buying.

Which Mac is best for photography?

The original (13-inch) M1 MacBook was solid, but with a maximum 16GB of RAM, it could never be an effective image-editing machine. However, with the latest 2021 MacBook Pro, Apple has corrected that mistake. It has the M1 Max chip and up to 64GB RAM. iI also comes with a 16-inch screen size, which is better than a 13-inch panel for viewing edits.

What is the best Mac for students?

The 14-inch and 16-inch MacBook Pro models offer a huge number of features for students. They’re packed with power, they boast bright displays, they have batteries that last a long time between charges, and they’re stylish. If you buy one of these for the student in your life, they won’t be disappointed.

Are there alternatives worth considering?

If you want to buy a new desktop or laptop, but aren’t quite sure if you want a Mac, perhaps consider a Windows PC, Chromebook, or gaming laptop instead. ZDNet has guides on each of these categories to help you find the best machine to suit your needs:

For your convenience, below is the top (non-Apple) option from our best computers guide: