Home offices, open-plan office spaces, small business premises, and call centers all can be noisy work environments where it can be difficult to focus on the job and keep productivity flowing.

It is now even more important to keep distractions to a minimum, since many of us are adapting to working or learning from home, where distractions abound. Active noise cancellation (ANC) headphones can be a lifesaver when your kids, pets, or housemates just can’t lower the constant din so you can get your work done.

Below, you can view our top recommendations for ANC solutions that are ready to handle your entertainment and professional needs, regardless of whether you are an in office worker, working from home, a lifelong audiophile, or just someone who wants to dampen the noise around you while at home or on the road.

Sony’s WH-100XM line has been the go-to ANC headphones since the technology was in its infancy. Over the subsequent generations, Sony has continued to improve its sound quality, ANC functionality, and battery life.

The latest iteration also revamps the design with a new, slimmer aesthetic. While early reviewers seem divided on the subjective opinions surrounding the new look, what nearly everyone agrees on is that the WH-100XM5 headphones offer the best ANC yet, and some of the best overall sound-blocking technology currently available.

All of these upgrades don’t come cheaply, but they still offer an excellent value proposition for the shopper who’s interested, first and foremost, in a long-wearing, comfortable pair of headphones that will block out the vast majority of outside distractions through a combination of passive sound isolation and advanced ANC technology.

While Sony’s latest and greatest ANC headphones are the WH-1000XM5s seen above, the company continues selling its incredibly popular WH-1000XM4s, which made their debut in 2020, as well. This previous-generation model lacks the secondary ANC processor that gives the latest model its noise cancellation boost. However, it boasts a very similar level of sound quality, albeit tuned slightly differently, and a list of features that can still beat just about anything coming out from other manufacturers this year.

On top of this impressive staying power, the WH-100XM4s also travel more easily than their newer siblings, thanks to their folding design and compact carrying case. This can be a huge boon to the business traveler or on-the-go worker who constantly must stow their ANC headphones in a backpack or carry-on.

Although some lamented the fact that the WH-1000XM4s resembled their own predecessor, the WH-1000XM3s, when they came out, others continue to appreciate the unit’s design aesthetic over its successor’s, pointing to the subtle accents like the metallic ANC microphone surrounds as well as the more metallic construction.

This balance of more broadly appealing aesthetics, 95%-as-good audio and ANC, and lower cost make them a wiser choice than their more expensive successor. That said, those wanting the absolute best in ANC will still want to drop an extra $50 or so.

Before the AirPods Max came around, Apple’s headphones had always been small, plastic earbuds aimed at a very general audience and priced to sell to casual users. These over-ear headphones used a mostly metal construction, a control scheme that borrowed, rather unexpectedly, from the Apple Watch, and a collection of internals that Apple believed would justify a price several times higher than standard AirPods.

While the debate rages on among audiophiles over whether or not wireless audio is even worth considering, the AirPods Max has found a vocal if somewhat niche fanbase. Many of those enthusiasts point to the fact that the AirPods Max is the only device that combines exceptional sound with all of the same benefits Apple device owners have enjoyed for years in the AirPods line. This includes instant connectivity, multi-device switching, and the ability to tweak settings and see charge levels on their iPhones, iPads, and more.

The AirPods Max is not without its detractors, who usually point out the weight, widely panned case (which our own Jason Cipriani called simple “a joke”), or the unusual control scheme. However, these complaints seem largely drowned out by the relative chorus of voices praising the sound quality as being not only the best of any Apple headphones today, but one of the best of any wireless headphones period.

Combine this with a level of ANC that meets or exceeds what’s currently offered by leaders like Sony and Bose, and you’ve got an entry that really does justify its price tag for the right user.

Most good ANC headphones aren’t cheap. Neither are good-quality gaming headsets. So, many people who need both might be looking for a single product they can game with and use to listen to music or participate in video calls.

The problem is the vast majority of ANC headphones rely exclusively on Bluetooth for their connectivity. While this protocol has been updated over the years to improve every aspect of it, it still suffers from some latency. This means the audio output by BT-powered ANC headphones can be delayed by long enough that there’s a noticeable discrepancy between it and its associated visuals. This can be annoying for videos and downright disastrous for games, where a split second can win or lose a match for you.

This is where the Razer Barracuda Pro comes in. It’s the rare product that combines Bluetooth, ANC, and most important, 2.4GHz wireless connectivity. Unlike Bluetooth, 2.4GHz wireless has almost no perceptible latency, putting it on par with wired solutions for gaming on your PC or any modern console. Meanwhile, the model supports Bluetooth 5.2 technology for use with your phone, streaming device, laptop, etc. You even can switch between the Bluetooth and 2.4GHz modes with a single tap to take a call and get right back to your game after.

Unfortunately, we did run into some issues with how the built-in ANC reacted to some games in our full review of the Barracuda Pro, but the rare combination of features still makes it a unique option well worth considering for gamers who also want impressive ANC while listening to music or video on the go.

As we’ve mentioned before, ANC technology generally doesn’t come cheap. The microphone arrays, onboard processing, and required power cells involved tend to push the price of most options well into triple digits. But Anker is a company known for taking traditionally expensive products and creating versions that are much cheaper but still retain most of the things about the more expensive options that make them great.

The company’s best budget-friendly take on ANC headphones at the moment is the Soundcore Life Q20. This unit offers one of the longest battery lives on the list, supports the same Bluetooth 5 protocol as the AirPods Max, and claims to block out up to “90% of ambient noise.”

You shouldn’t expect it to have quite the same sound quality as the options on our list that cost over three times as much,  but that doesn’t mean it can’t get you very, very close. Between the surprisingly small size of that performance gap and the shockingly low price, these are a great option for the commuting youngster or even the supposedly responsible adults who can’t seem to stop breaking or losing their wireless headphones.

Whether you are back in the workplace, in a coffee shop, or at home, environmental noise can be a hindrance to productivity and entertainment. While every option on this list can help dampen noise, if not eliminate it entirely, each option also offers a unique set of features that make it best suited to particular users with more specific goals than just generally blocking noise.

While deciding on our recommendations, the focus was on finding products that provided solid noise canceling as well as additional features that made them stand out as a great option for particular types of users: audiophiles, commuters, gamers, budget-conscious listeners, etc.

Noise-canceling headphones reduce unwanted ambient sounds using active noise cancellation. Active noise-cancellation uses microphones to listen to outside sound and “cancels” out those noises by producing soundwaves that destructively clash with external sounds, canceling them out before they can reach your ears.

No. Noise-canceling headphones are not specifically meant to protect your hearing. That said, the lack of outside noise means you can often listen to your audio at lower volume levels than you would if it were competing with ambient sounds. This results in indirectly protecting your hearing by helping you keep your volume at a safer level, as detailed in our 5 tips for preventing hearing loss caused by headphones.

Yes. Some headsets offer adaptive noise-canceling and will allow users to select the level of background noise they are comfortable with, including “transparent” or “hear-through” modes. This can be particularly useful if you want to wear them while on the move and stay aware of traffic or your general surroundings.

Here are a few other options to look into:

Bose was one of the early pioneers of ANC technology and continues to be a major player for some die-hard fans. The Quiet Comfort 45 headphones offer a great blend of useful features, exceptional sound isolation, and relatively affordable cost.

Sennheiser is better known in audiophile circles, but the company has made several excellent ANC options for the average user as well. The HD 450BTs is the most affordable option in Sennheiser’s line that we’d recommend, offering that signature Sennheiser sound for less than $150.

Anker’s upgraded model in the Soundcore ANC line. The Q30s expand on the Q20s with customizable EQ settings via the Souncore app, NFC support for fast pairing, and USB-C charging, all for about $20 more.

Watch the video here: The 5 best noise-canceling headphones of 2022 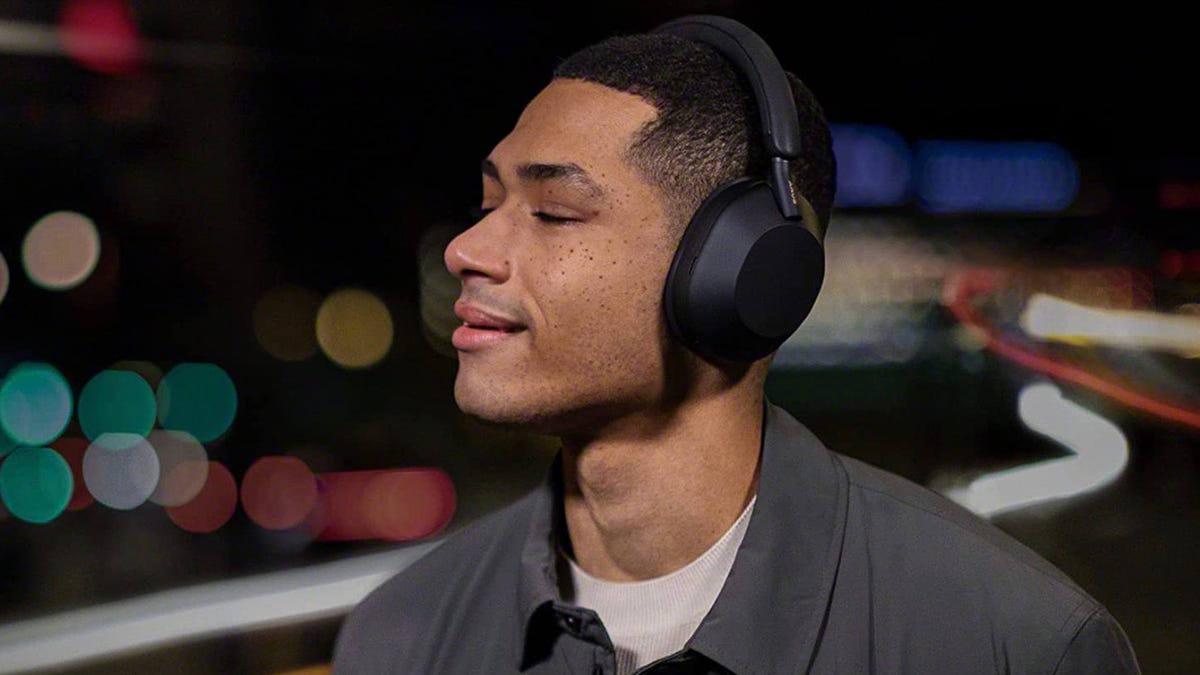