If you want a robust design built to withstand rough treatment outdoors with long battery life and don’t need non-fitness bells and whistles, the Garmin Fenix 7 is the easy choice. That is, unless the price is a determining factor – the Fenix 7 is almost twice as expensive as the smaller 41mm model of the Apple Watch 7. Overall, the Fenix 7 will do just about everything you need as a more serious athlete, but might be too much if you just want a light exercise companion.

The Apple Watch 7, much like Apple’s wider smartwatch product line, is designed moreso to suit the needs of an everyday user. While this does include fitness features, overall a serious sportsman would find themselves much better equipped with the Garmin Fenix 7 on their wrist. More casual fitness fiends will find the Apple Watch 7 a suitable, cheaper alternative to the Fenix 7. It’s an all-rounder smartwatch with plenty of added benefits outside of fitness.

If you’re in the market for a new watch, the Garmin Fenix 7 and Apple Watch 7 are two that are likely to grab your attention. Both are packed with tools that’ll serve you well whether you’re working out or taking it easy, but they’re very different devices and we’re here to help you choose the one that’s right for you.

While Apple released the Apple Watch 8 in early 2022, the Apple Watch 7 remains a popular choice for those who aren’t particularly bothered by the new features that come with the 8, which are crash detection, Bluetooth 5.3 and body temperature monitoring. We’re still waiting to hear when we might see the Garmin Fenix 8.

The biggest difference between these two watches is that the Apple Watch 7 is an everyday watch with universal appeal, while the Garmin Fenix 7 is a serious sports watch. If you’re not aiming to set new personal records and crush fitness goals, opting for the Fenix means you’ll be paying for a lot of tools you’re not going to use.

If you enjoy exercise for fun and recreation, the Apple Watch 7 will likely have everything you need – particularly when paired with an Apple Fitness Plus subscription. However, if you’ve set yourself a goal of crushing your marathon time, tackling an Ironman, taking on a sportive, or working on your trail running, the Fenix 7 will be a fantastic training partner.

Those aren’t the only differences, though – design, price, battery life, and third-party support are all important considerations too. Scroll down for the full lowdown on both watches. Alternatively, if you’ve made up your mind, we’ve found the best prices for you right here:

The Garmin Fenix 7 and Apple Watch 7 both come in various different configurations and sizes, which is well worth bearing in mind when choosing between them.

The Fenix 7 comes in eight different configurations. There are three sizes, with cases measuring 42mm, 47mm, and 52mm in diameter respectively. Each of these can be fitted with either Garmin’s Power Glass or Sapphire Solar glass (the latter of which is more resistant to scratches). The two smaller models are also available with Corning Gorilla Glass.

This table shows how the various options compare:

All of the Fenix 7 models come in a choice of different colors and materials, including stainless steel, titanium, and DLC (diamond-like carbon) titanium.

The Apple Watch 7, by contrast, comes just two sizes: 41mm and 45mm. Neither size comes with solar charging or different types of glass for the lens, but both are available in a wide array of different materials and colors. Cases come in aluminum or stainless steel, and you can pick from a range of metal bracelets, silicone straps, and woven bands.

Both the 41mm and 45mm versions are available with cellular connectivity, which allows you to use online services and make calls without having your phone within Bluetooth range.

Whichever watch you choose, adding extras like premium case materials and leather straps will bump up the price. If you’re buying an Apple Watch 7, you might also want to consider factoring in the price of an Apple Fitness Plus subscription, which will unlock tools like Time to Walk and Time to Run, plus Apple’s full range of instructor-led workouts.

The most obvious physical difference between these two watches is that the Apple Watch 7 has a rectangular face while the Fenix 7 is round, but that’s only scratching the surface.

Both watches have touchscreens for scrolling through menus, selecting apps, and panning across maps. The Apple Watch 7 also has a single physical button that serves to navigate back through menus, plus a Digital Crown that can be rotated to scroll, and pressed to select options.

The Fenix 7 has five physical buttons, which are designed for use with wet, cold or gloved hands. The touchscreen is disabled by default during workouts to avoid accidentally pausing or ending workouts, and you can choose to switch it off altogether if you prefer to stick with the buttons alone. The start button has a metal guard to protect against damage and, again, avoid accidental presses.

Despite that, there’s not much difference in weight. The 41mm Apple Watch 7 weighs 42.3 g, not including the strap, while the 45mm version is 51.5g.

The 42mm Garmin Fenix 7S weighs 47g, the 47mm Garmin Fenix 7 is 56g, and the 52mm Garmin Fenix 7X Solar is 68g. Part of the Fenix 7X’s weight can be attributed to the LED flashlight fitted into the top of the watch, which can be activated by double-pressing the backlight button.

All Apple Watch 7 devices are topped with sapphire crystal glass. The standard Garmin Fenix 7 has Corning Gorilla Glass, while the solar editions come with either Garmin’s own Power Glass or Power Sapphire.

The Apple Watch 7 has a bright AMOLED display with an always-on modem while watches in the Fenix 7 line have transflective memory-in-pixel (MiP) displays.

MiP is less bright, but contributes to the Fenix 7’s extra-long battery life. It’s not as striking as AMOLED, but is still clearly visible in most lighting conditions, and has a backlight that can be activated with a press of the top right button.

One of the biggest differences between the Garmin Fenix 7 and Apple Watch 7 is battery life. Whichever model you choose, the Fenix 7 lasts much, much longer between charges.

The table below shows the maximum quoted figures for the standard 47mm Garmin Fenix 7 and the Apple Watch 7:

If you mostly train outdoors, it’s well worth checking out the Fenix 7 solar models, which last a remarkably long time between charges provided they get a regular dose of sunlight. Battery life for the 52mm Fenix 7X Solar is particularly impressive due to its extra large solar cell.

To give you an idea, here are the battery lives of the 47mm Fenix 7 Solar and the 52mm Fenix 7X Solar with three hours of direct sunlight per day. As you can see, size really does matter.

When it comes to general smartwatch features, it’s perhaps no surprise that the Apple Watch has the most to offer. It integrates seamlessly with your iPhone, giving you easy access to your calendar, emails, address book, maps, and much more.

While you can certainly wear the Garmin Fenix 7 as a regular watch (and Garmin’s mapping makes it superb for everyday navigation), it doesn’t offer the same breadth of tools as Apple’s watch. For starters, there’s a much wider array of third-party apps available for the Apple Watch 7. Garmin does have an app store (Garmin Connect IQ), but there’s less choice and most of the apps are sports-focused.

Another advantage of the Apple Watch 7 is its built-in microphone, designed for making calls and accessing Siri. This is something that’s missing from the Fenix 7. In fact, so far the only Garmin watch with a microphone is the Garmin Venu 2 Plus.

Apple Pay is almost universally accepted in stores around the world. The Fenix 7 has Garmin Pay, but while this is supported by lots of banks and public transport networks in the US, it’s less useful in the rest of the world.

The Apple Watch 7 is available with cellular connectivity if you want to use online tools without a connection to your phone, but at the time of writing there’s no LTE version of the Fenix 7.

However, the Garmin Fenix 7 does have one big advantage as an everyday watch for many people: it’s compatible with both iOS and Android.

The Garmin Fenix 7 is a dedicated sports watch, so as you’d expect, it has a far more comprehensive suite of workout monitoring and fitness tracking tools than the more general-purpose Apple Watch 7.

When we reviewed the Apple Watch 7, we were impressed by the accuracy of its heart rate monitoring, which closely matched that of the chest strap heart rate monitor we compared it to. We did, however, find that we needed to push the watch up our arm to get the most accurate readings. The Garmin Fenix 7 presented no such problems, and delivered extremely accurate measurements with no need for fiddling or adjustment.

Unlike the Apple Watch 7, the Fenix 7 has a skin temperature sensor that keeps tabs on your temp during workouts. This data is also used to estimate how much sweat you lose during a training session so you can make sure you rehydrate thoroughly afterwards.

Both watches can track a range of activities, and have on-board GPS to monitor your pace and distance during outdoor workouts, but the Fenix 7 offers many more modes, with training tools designed by people with an intimate knowledge of each sport. Runners and cyclists are particularly well catered for; a real-time stamina meter to show how much juice you have left in the tank, automatic climb detection, suggested training sessions, estimated race finish times, and smart pacing strategies are just a small handful of the tools on offer.

You can also use any Fenix 7 to check your seven-day training load on your wrist. This is presented as a bar chart showing your training load each day, the type of training (base, tempo, threshold, speed etc) represented by a color, and whether your tracked activities are having a positive impact on your fitness. You’ll also see a number representing your training load that will help you judge if you’re at risk of under- or over-training.

Although there are downloadable golf apps for the Apple Watch 7, the Fenix 7 comes with everything a golfer needs pre-installed. That includes details of some 42,000 courses, shot detection, digital scorecards, a full vector map, and much more. It’s also legal for use in tournaments.

When you’re not working out, both watches include SpO2 sensors for keeping track of blood oxygen saturation, as well as sleep tracking features that use the optical heart rate monitor and accelerometer to determine sleep quality and stages.

One feature that the Garmin Fenix 7 lacks is an ECG sensor to detect signs of atrial fibrillation (an irregular heart rhythm that should be investigated by a doctor). Anyone can develop atrial fibrillation, including the type of serious athletes who’ll be wearing a Fenix 7, but so far it’s not something that any Garmin watch offers. 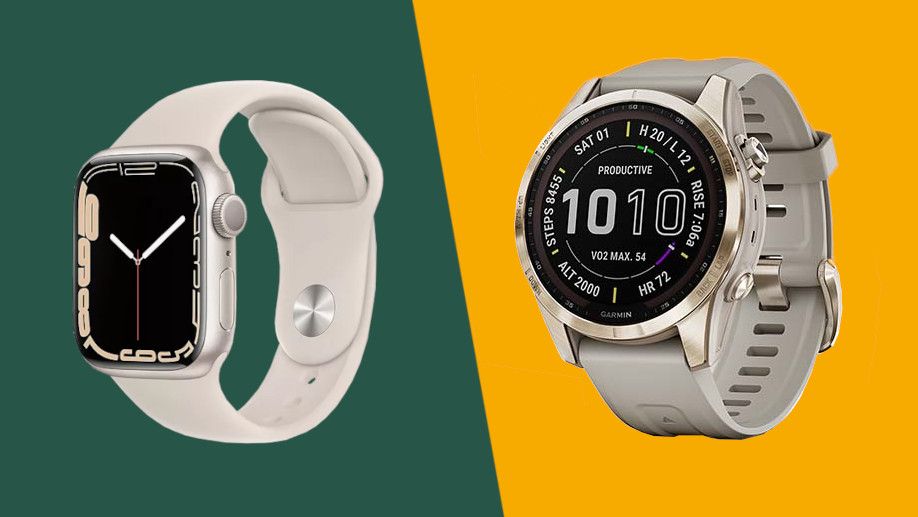